It’s a game that many Hawaiians remember playing as children. But its past and present reveal a larger purpose.

In ancient Hawai'i, ulu maika was a traditional stone disc-rolling game. Its beginnings likely came well before the 18th century when the first-known written history of the sport was recorded. Players used either disc-shaped stones (maika) or half-ripe breadfruit (ulu) and rolled them down a long path as far and straight as they could.

Ulu maika is one of the games played during Makahiki, when communities gather to feast and play games. Makahiki starts in late October or early November and lasts for four months.

“The benefits of ulu maika are a connection to the land and a connection to the past,” says Cedric Akau, M.D., physical medicine, rehab, and sports medicine specialist at Straub Medical Center. “It’s not only physical, but it’s emotional and should be an uplifting thing and a source of pride.” 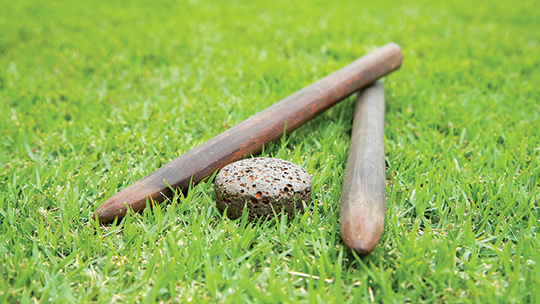 The sport of ulu maika lost popularity in the 19th century when missionaries discouraged participation.

Historians point to the influence of missionaries for the decline of ulu maika in the 19th century. Missionaries discouraged activities that involved gambling (as sports did at the time) and these sports faded away. Many of them later saw a renewal, but the popularity of modern-day bowling among Hawaiians in the 19th and 20th centuries kept ulu maika from seeing the same rebirth.

Until now. Today, players use disc-shaped ulu maika made of stone or wood or use bocce balls and roll them down a two- to three-foot-wide path marked with tent pegs or other markers. The player who rolls it the farthest while staying within the pegs wins. 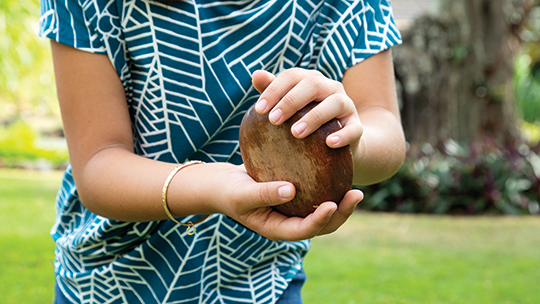 Players roll a disc-shaped block of wood or stone (maika) as far as they can between two posts.

As with bowling, doing well in ulu maika takes “not just strong arms,” says Dr. Akau. “Having balance on your two feet, core and extremity strength, and eye-hand coordination are all part of what makes a person good at throwing.

“Strength, balance, and eye-hand coordination all mean that the kinetic chain of the body is moving together as one. It’s a multisystem requirement of the body.”

Dr. Akau recognizes that ulu maika and other games weren’t just frivolous activities for native Hawaiians. He says they were well designed and served a purpose.

“In Hawaiian culture, it was not only the action and the physicality and the emotion and the cultural perspective, but there was a lot of science involved. Acceleration. Force. Power. Trajectory. A lot of the physics involved in the athletic aspects were honed in on. Hawaiians are very good scientists.” 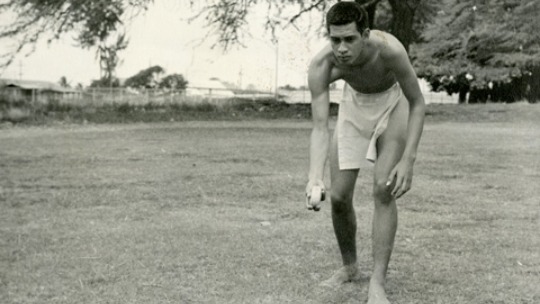 Ulu maika has been played at the Bishop Museum for decades.

Which is what makes learning about these games perfect for today’s student curriculum. “You can make it fun for kids,” says Dr. Akau. “You have science, you have culture, you have physical, and you have health.”

He says the curriculum in elementary school should include more than just how to play the sport, “but what it means during the time of Makahiki: Regrowth, rejuvenation, teamwork, sportsmanship, and a friendly rivalry while supporting each other. Hawaiian culture reaches across all cultures.

“That would be my dream. To see ulu maika and the other sports continue to burgeon at least at the elementary school level.”