No matter how much we love them, our family can drive us crazy sometimes. Whether it’s the bossy sister, strict mom, wacky uncle, or older brother who gets all the attention. But what if your parent is also your boss or your child is also your employee?

We profile three longtime multi-generational family businesses to find out how they work and play well together. They talk about their ups and downs and what they must do to keep their business – and family – together.

Family Treasures
Leighton Lam Designs
Kaily Lam had no intention of ever  moving back home. After graduating from Punahou School, she attended Stanford University, where she got a  degree in international relations. She was on a corporate track with a career in advertising at Google in Atlanta. But after getting married, she realized that Hawaii would be ideal to raise a family.

With her extensive education and professional experience, she could have landed a job at a big local firm. Instead, she joined her dad’s jewelry business. “It’s more than just a job,” she says. “This work is close to my heart. It’s a unique opportunity to be part of a family legacy.”

It was a difficult transition at first. She had to learn to take direction from her parents again. But compared with the corporate world, being part of a small business gives her the opportunity to be more entrepreneurial and the freedom to raise her new family. “There are days when I still feel like the child,” she admits. “But for the most part, we all respect each other’s role in making the business successful.”

Dad Leighton couldn’t be happier having his daughter on board. His business and family mean the world to him. Kaily’s corporate experience has helped him concentrate on the creative part of the business, which he started in 1979. He went from making earrings out of resin to having a jewelry line of gold, silver, pearls, and gemstones that’s now sold in 250 stores throughout Hawaii and the world. His wife, Lani, handles the finances and operations. “My business wouldn’t have been possible without my family’s support,” he says. 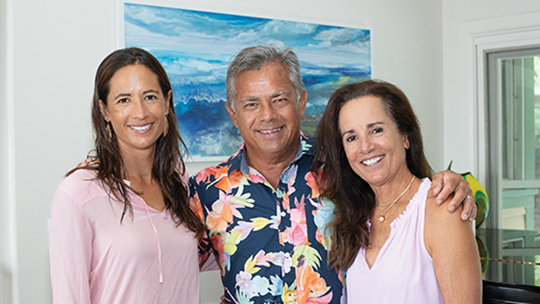 Although sales have been down due to the pandemic, they’ve come up with ways to survive, including expanding online sales and creating a line of face mask jewelry chains.

Leighton would like his son, Lucas, to also return to Hawaii to join the family business. “I started as a small mom-and-pop operation,” he says. “It’s up to the next generation to take it to a higher level.”

When he was attending Kaimuki High School, he’d tell his friends that his dream was to one day take over his dad’s auto shop and marry his high school sweetheart. When his dad died in 1985, Alan carried on the family business on the corner of Waialae and 8th avenues. Alan worked on the cars. His high school sweetheart and now wife, Gwynne, balanced the books. Now 67, Alan has his dream set on having his daughter, Laurie, carry on the family business.

“It’s a blessing having her here,” he says. “At my age, I’m trying to slow down.” For Alan, slowing down means working eight hours a day instead of his usual 12. He’s the first to arrive and the last to leave.

“Even though this is a small business, it’s a big operation,” says Laurie, 36, who helps manage the business with her sister, Kris. “Work is what he loves, but we’d like him to enjoy life more and take more vacations.” 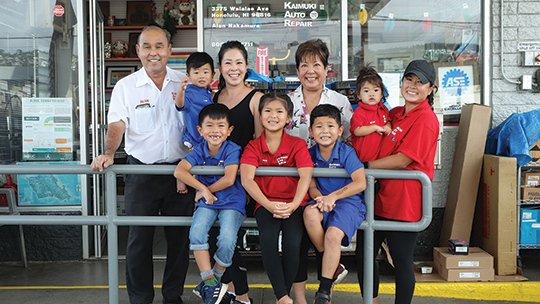 Alan and Gwynne Nakamura (both in white) with daughters Kris (in black) and Laurie (wearing a cap) and grandkids.

Known as the "mayor of Kaimuki” by people in the community, Alan takes the time to explain to customers about their car problems and give honest advice. “My customers are like my family,” he says.

Sometimes old school clashes with new ways of doing business. The daughters would like to do more social media advertising and switch to an electronic record-keeping system. “I’m used to being the boss, but now I’m learning from them. I must admit, they’re right most of the time. Just don’t tell them I said that,” he says with a laugh and smile.

Alan doesn’t plan on retiring anytime soon. He points to his Japanese daruma dolls on the shelf in the front office with their blank eyes. “You paint the eyes. When you paint the last eye, it’s symbolic that you’ve come full circle. That’s the time for them to take over. I may paint the eye soon, but I think I’ll wait a little longer,” he says with a wink.

Wong’s Does it Right
Wong’s Chinese Restaurant & Bakery
Sick in his hospital bed, Jackie Wong’s dad would tell her, “You’re the one. You’re the only one who can take over.”

Wong’s dad died two years later, leaving her and her mom to continue the family restaurant in Hanapepe on Kauai. Wong and her three siblings worked at the restaurant when they were kids. But her dad would give her most of the work.

After Wong graduated from high school, her dad told her to either go to college or move out of the house. With nowhere to go and no job lined up, she enrolled in the culinary program at Kauai Community College, where she learned to create new dishes to add to her dad’s Cantonese menu. “I used to wonder why he was so hard on me,” she says. “I didn’t realize until later that he was training me to one day take over.” 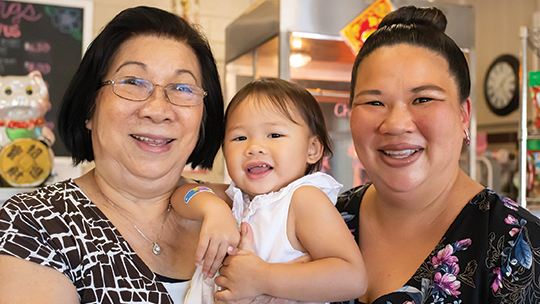 Keeping the restaurant going has been a labor of love, especially during the pandemic. There are fewer weddings, birthdays, and funerals to cater. And tour groups don’t drop off busloads of tourists like before.

Her siblings have left Kauai to start their own restaurants and they try to convince her to do the same. But Wong can’t imagine working anywhere else. She’s built longtime relationships with generations of customers who look forward to ordering their famous roast pork and lilikoi chiffon pie. “My heart is here,” she says. “Plus, you can’t beat being your own boss.”

Wong hopes the next generation can one day take over and bring new energy into reviving the business.

“I just want to carry on my dad’s legacy,” she says.

Photos: Earl Yoshii (above and middle) and Jason Phillips (bottom) 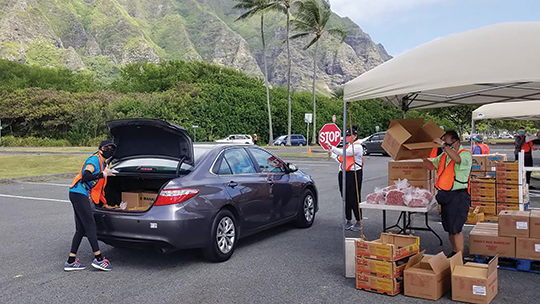 circle of caring volunteers give back 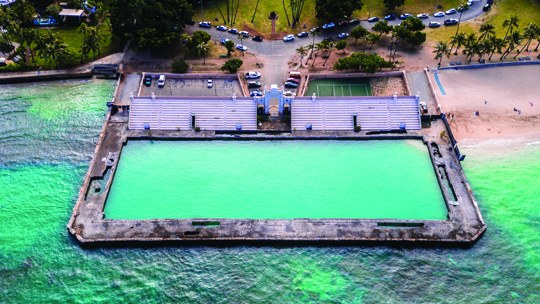 do you remember when? 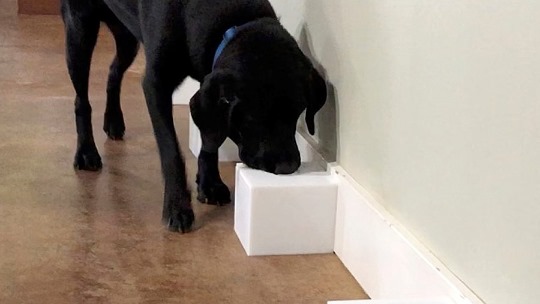 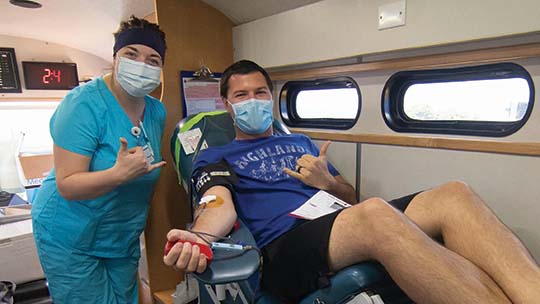