Waging a War on Toads in My Garden

One of the biggest mistakes I made when I took up gardening was to underestimate my enemy. Heck, I didn’t even know I had an enemy.

I soon found that my enemy lurked under rocks, in drainage pipes, and in holes in the earth. No, it wasn’t Gollum. It was the giant Bufo toad (also known as the cane toad). Eventually, slugs and snails would join this club of Garden Ravaging Organisms and Nuisances (GROAN), but I’ll save that war story for later.

I already knew we had two resident toads (one large and one smaller), because they would come out on rainy nights. Before I started raising plants, they weren’t a problem. Then I discovered just how damaging they could be to a fledgling garden.

One day, I came home to see two bulging eyes looking out at me from a large pot of seedlings. A large toad had buried its body in the moist soil, destroying my seedlings. I was so mad that I wanted to whittle a spear and go caveman on its amphibious butt!

It took one more similar incident for me to get serious about this problem. So I started gathering intel about my warty foe.

Toads are generally seen as helpful creatures for any garden because they eat most bugs and other destructive garden pests like slugs and snails. (This is why I don’t actively plot to kill my garden toads, but I still hate them for digging up my seedlings.)

They don’t need to be near water as much as their cousin, the frog, but they do need wet areas (such as canals or ditches) to lay their eggs.

You may have heard stories of dogs or cats being poisoned because they bit a toad. This is because glands at the back of a toad’s head and along its back secrete a highly toxic substance. Don’t let your pets or kids touch a toad; if you touch one, wear gloves.

Toads are attracted to standing water, moist soil, and dark, damp places, like drainage pipes and lumber piles. They’ll eat pet food, if given the chance. Chemicals (like bleach) can harm or kill them, but will also harm your plants and your pets, and make your soil unfit for planting.

We found that they move around, probably to find water. One night, my husband spotted a toad hopping across our four-lane street, heading toward our house. Hey, why did the toad cross the road? To get to Jamie’s house to dig in her garden, of course! 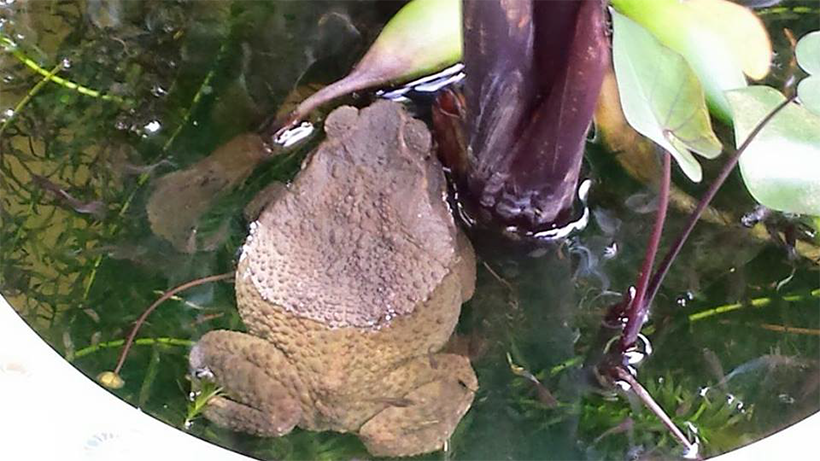 Because I’m not willing to kill the toads in cold blood (so to speak) or capture them, I can only take defensive measures against them. I just hope they are doing their part by eating lots of bugs.

>> For my potted plants, I place pebbles or mulch over any exposed soil. If there’s no exposed soil, the toads have no reason to jump into the pot.

>> I put wire mesh over some areas of my garden and over some of my planters to keep the toads out. It’s not pretty, but it works.

>> Toads don’t like salt or salt water because it irritates their skin and eyes. I keep a spray bottle of very salty water on hand in case I need to chase them away. You have to be careful where you spray the salt water because salt is not good for soil and most plants. So I try to spray only the toad (aim for the eyes). It must work because I saw one swipe at its eyes before it hopped away.

And so, I’ll continue to wage my war, unless some epidemic wipes them out (crossing my fingers). But they're not backing down, either. I recently found a tiny dead toad on our walkway and there was a live baby toad hanging out in my Syngonium. Great, just great. They had babies!