This Thanksgiving will be different. You may not be able to share a feast with extended family, but there’s still a way to spend the day giving back by doing something safe and fun with the people you love.

“Folks wake up on Thanksgiving Day and hopefully they take a moment to step back and think about the things they're grateful for in their own lives. A lot of times people, in that same time or space, think about people who aren't as lucky,” says Jill Wright, director, philanthropy and community relations at the Institute for Human Services (IHS). “The Homeward Bound race gives people an opportunity to share and to give back to people who are struggling in their community.”

The Home Team
Homeward Bound is an annual 5K planned by Punahou School’s girls cross-country team to benefit IHS. It’s tradition that the junior girls on the team select freshmen to help with the event, training them until they’re ready to plan it themselves. The team has been planning Homeward Bound, writing letters to sponsors and recruiting ambassadors, since two girls made it their senior project 12 years ago. This is Malia Dickhens and Lauren Saunders’ second year working on it. 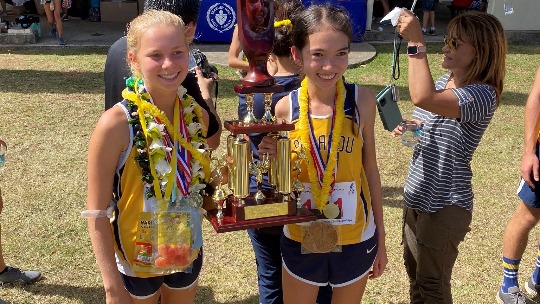 Dickhens and Saunders after their cross-country championship win in 2019

Dickhens says she originally saw the race as an opportunity to build up her college application doing something fun. But a tour of the IHS women’s facility opened both girls’ eyes to what homelessness looks like. “I've seen homeless people on the street, but I've never really understood that there was a cycle of homelessness,” says Dickhens. “They couldn't get a job because they don't have a place for their money to go. They don't have a bank account. They don't have the clothes for the interview. It's something I'd never thought of. It's the system that really makes it hard for the homeless to get back into the working community and that's what IHS helps them with, which is why it’s super important.“ 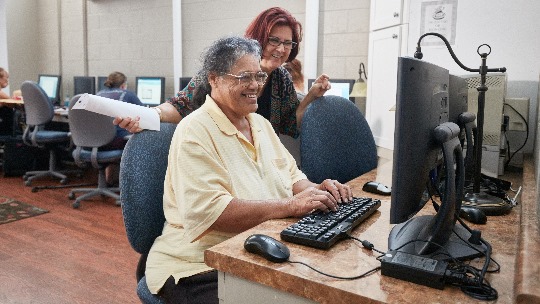 IHS provides employment resources to those in need, including access to computers.

Saunders knew homelessness was a problem in Hawaii but seeing IHS’s on-site childcare services and dedicated job application computers changed her understanding of the issue. “I thought that was so amazing to see the kind of work they’ve done,” she says. “Since my involvement with Homeward Bound, I’ve done more research on what other causes IHS helps with and they're just a really amazing organization that I didn't really know existed before.” 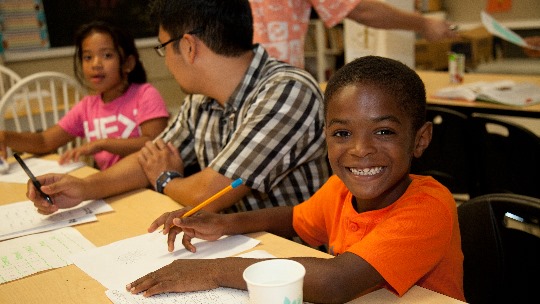 In the Running
This year’s race is going virtual, which means the whole family can participate together even if they’re apart. A virtual race means participants aren’t tied to a time or place and that you can register statewide and even on the Mainland. Wright says there are benefits to a virtual race. “One neat thing about doing a virtual race is you don't have to run. You can walk. You can ride your bike. You can sleep in if you want to. It’s just to show your support.” 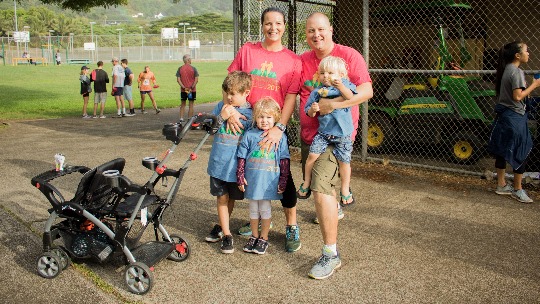 Families can participate in the Homeward Bound 5K together.

Register for the Homeward Bound 5K or see other ways to help IHS.