Not so long ago, Old Stadium Park in Moiliili was a mess.

Once a place where baseball greats like Babe Ruth and Joe DiMaggio played, “It had been overtaken by the homeless,” says Manoa resident Patricia Johnson. “Kupuna didn’t feel safe bringing their grandchildren there. And it was not being well taken care of. It was just really sad.”

Johnson became part of group that revitalized the park in 2018, in part because she wanted to bring bicycling back to the park as a member of the Hawaii Bicycling League.

She also worked to bring Blue Zones Project to Manoa. The community partnered with Moiliili, Makiki, and McCully (now known as the 4M). The 4M became a Blue Zones Project demonstration site in 2017 and selected Old Stadium Park to be their marquee "built environment" project

“It was a huge opportunity for Blue Zones Project to make a mark in the area,” says Dylan Armstrong, who chaired the Manoa Neighborhood Board when the project began, “especially because the park has so much history attached to it. Many people's childhood memories involve going to the stadium or learning to rollerblade or roller skate in the park when they were kids.”

Government agencies and community groups worked on planning and policy issues, while hundreds of volunteers helped with the cleanup. Today, the park provides the neighborhood with an area to gather, exercise, and host sports events. A large mural depicting the history of the park adds to its aesthetics. 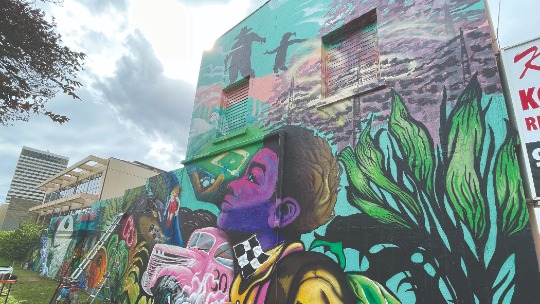 A large-scale mural, designed by members of the community, depicts the diverse ecology
and activities of the area's vivid past and present.

The 4M partnership is an example of how Blue Zones Project is continuing to grow in Hawaii and getting residents involved in improving the health of their communities. Blue Zones Project – which was brought to Hawaii in 2015 by HMSA – is a community initiative that works with businesses, restaurants, schools, grocery stores, and other organizations to implement well-being best practices and make comprehensive changes to a community’s environment.

The effort to bring Blue Zones Project to 4M was unique because of its setting. “4M is the most urban Blue Zones Project community we have across the nation,” says Kelsie Cajka, the Oahu partnership lead for Blue Zones Project. “Typically, we work with smaller communities, so there were a lot of questions about how four distinct communities could successfully work together in an urban setting. I think that everyone on our team has really been impressed with the ability to bring together these stakeholders.”

It also shows Blue Zones Project’s ability to expand into more areas that are seeking to improve the health and well-being of their communities.

“I see a lot more opportunity for broader partnerships,” says Cajka. “When you look past the communities we’re engaged in, we want to see how we can expand into neighboring communities and organizations and continue to promote health and well-being solutions for Hawaii.”

Colby Takeda, the statewide partnership lead for policy, says, “I think it should be an inspiration for other community groups to find projects that can make a difference and make their neighborhoods healthier and happier.”

For more info and photos on the Old Stadium Park project, visit islandscene.com/more.