Another Look at Alzheimer's and Dementia

My maternal grandpa used to say that he fell in love with my grandma at first sight. They met when my grandpa was a master sergeant and my grandma was a secretary in the U.S. Army. They got married in 1947, raised five children, and ran their own real estate business for many years. 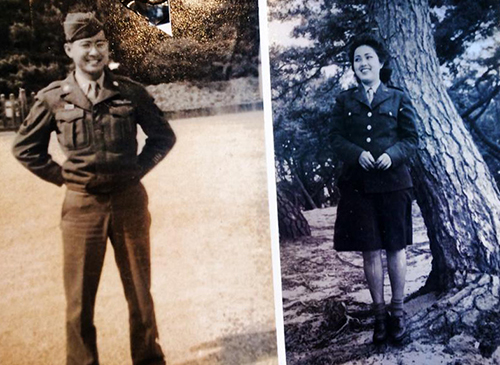 My grandpa and grandma in undated photos.
When I was growing up, my grandparents lived in a high-rise building near the former Daiei (now Don Quijote) on Kaheka Street. Because we lived in Hilo, we were usually only able to visit once a year during the holidays. My grandma enjoyed cooking, spending time with family, and traveling to Las Vegas with my grandpa. None of us could have predicted that she soon wouldn’t be able to travel or do the things that brought her joy.

Before I graduated from high school, my grandma started showing signs of memory loss. She was later diagnosed with a type of dementia that gradually affected her ability to recognize people, speak, and care for herself. Eventually, she needed around-the-clock care from a nursing facility. In 2014, she passed away at the age of 92.

When I shared my grandma's story in the past, I was almost always asked if there was a difference between dementia and Alzheimer's disease. I didn't know it then but dementia can be described as a decline in cognitive function caused by damage or disease in the brain. Alzheimer's disease is believed to be the most common cause of dementia and it has no cure. While research is still ongoing, healthy habits such as eating a plant-based diet and exercising regularly may help reduce your risk of cognitive decline.

A place to start

If your loved one has recently been diagnosed with Alzheimer’s disease or another type of dementia, you can contact the Alzheimer’s Association Aloha Chapter for information and support. The association offers resources that include a 24-hour helpline, caregiver support groups, educational programs, and safety services.

Caregiver support groups are run by volunteer facilitators on Kauai, Oahu, Maui, and Hawaii Island. HMSA member Ira Kazama is one of those facilitators. Kazama leads the support group that meets once a month at the Calvary Chapel of Honolulu in Aiea. "One of the things caregivers experience in a support group is finding out that they aren’t alone," Kazama says. "They receive a lot of emotional support from people who really understand what they’re going through."